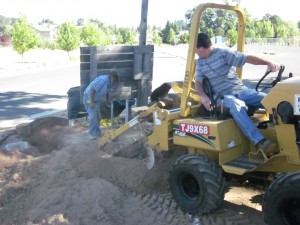 Jim operates the trencher while Larry checks the depth.

Last week (August 29) under the direction of Larry Wise, 600 feet of electrical conduit was laid.  This connects the parks service pole to a new subpanel.  When completed the irrigation system will have power and circuits for future use will be available.

PG&E has again agreed to assist with the Park’s development.  This time by pulling the wire through the conduit.
Installation of the irrigation system is ongoing.  It began last week with Larry Wise laying out the baseball fields and beginning to transfer the irrigation plan to the field itself.  He was assisted by Dennis Rollins on the chalker. 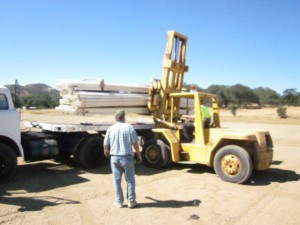 The City of Lakeport delivered irrigation pipe from winter storage.

Today Jim Holmes joined the crew to operate the trencher.  The City of Lakeport delivered the pipe from the City Yard.  The Committee had stored it there for the winter.  Larry and Dennis laid close to 2000 feet of it along the new trenches. 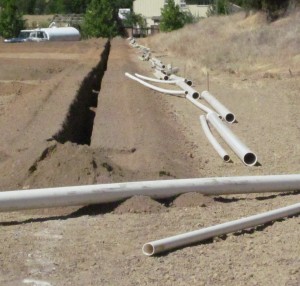 On Wednesday five more people will begin the process of cutting, gluing and assembling the pipes, valves and sprinklers that make up the irrigation system.  This will take several days.  This group was provided and will be supevised by Floritino Vazquez.

The Westside Community Park Committee owes thanks to all who work on the project.  The Committee is truly appreciative of Larry Wise.  Without his knowledge and countless hours of volunteering the current project would not be possible.

This entry was posted in Development News. Bookmark the permalink.