Mike Lucchetti, Lucchetti Excavating, began initial work on the encroachment to the Horse Park off of Highway 175 last fall.  Work was halted with the beginning of the rainy season.  Recently a meeting was held at the site with Mike Lucchetti, a representative of Caltrans and Committee Chairperson, Dennis Rollins.

The purpose of the meeting was to review the progress on construction and plan for the completion of this project.  Lucchetti indicated that he would be ready to proceed within the next month.

Mike Lucchetti is donating his equipment and time to the project.  He provided Rollins with a list of materials needed.  Rollins is working to secure those now.  As always he is searching of deals for the Park.

Rick Thorn, Clear Lake Redi-Mix, has offered to donate the trucking to bring road base from Granite Construction’s quarry a few miles up the road on Highway 175.  Rick is a long time supporter of the Westside Community Park development.

Trucking is still need to deliver asphalt (also from Granite’s quarry).  If you know of someone willing to help transport 60 tons of asphalt, please let us know.

The Committee continues to seek funding for site planning, engineering and environmental studies.

An area was established on the original master plan for the Westside Community Park for an equestrian center.  It is approximately 4 acres in the southwest corner of the park.  The Committee met with Lakeport City staff during the summer of 2014 to discuss the issues involved in beginning development of that facility.  Following those meetings, the Committee request the project be placed on the City Council agenda.  The Council vote to give the Committee the authority to begin preliminary planning.

This planning will include a needs assessment, financial viability and preliminary design. 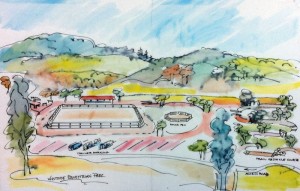 Read the article on the Council’s action in the Lake County News  here.

You can read the script of the Power Point presentation to the Lakeport City Council here.

Goodie bags for a 5K run aren only a way to entice runners to participate,Replica 350 Boost Online, but also a way to score sponsors for your event. After all,Cheap Jerseys Wholesale, active runners are the ideal target for a number of sponsors,replica michael kors, Mark Beal,wholesale oakleys, a public relations expert tells “The New York Times.” By packing your goodie bags full of stuff that runners will actually use after the race,cheap ray bans, your sponsors get the most exposure and your participants leave the race happy. Step 1 Tell vendors in your area that you looking for sponsors to help support the race and fill runner goodie bags. Give parameters for the bag inclusions,fake oakley cheap, such as samples,replica ray bans, coupons and fliers,michael kors for sale, along with the number of bags you like to fill. As Beal points out,cheap fake oakleys, the people who participate in races are the same active people who like to try new products,Andre Ellington Jersey Paypal Online, particularly if they runner centric. Step 3 Add some type of hydration to the bag as well. Whether it a small bottle of water or a sample electrolyte drink,wholesale cheap jerseys china, runners will be thirsty and can have something to drink while waiting at the finish line or for the awards portion of the race to start. Step 4 Ask sponsors to give items for runners skin,Authenitc Dwight Freeney Jersey, face and body. Lip balm,Cheap Matt Barkley Jersey, lotion and even a small tube of muscle cream can help runners in their post run recovery. Even if a sponsor doesn manufacture a skin or body item,cheap jerseys from china , they can use their own labels to still advertise their company while offering useful products and goodies to grateful runners. Step 5 Spend some of your race budget on memorabilia and race “swag.” Those who complete a 5K may want something to remember the experience by,cheap michael kors bags, so a hat,Authenitc Pat Tillman Jersey, T shirt or even a silicone bracelet is a cost effective and impactful way to fill out a post race goodie bag.
going to sing their new single. Shibaken looks irritated for it is a lip synching. He becomes fidgety. He thinks that before the official performance,cheap oakleys, he must definitely talk[/persuade] to her that if she kept on acting dumb[/foolish],fake cheap oakleys, how can her band continue to survive. He stares at the toilet room and thinks that she will definitely come back to this place. He sits on the bench to wait for Riko. Then,Replica Jersey Shopping Store, he spots something. He sees Mari pushing Aki into her dressing room. After the door closes,Cheap Yeezy New Release, surprised Shibaken thinks that even if it is just a flash but he saw it. No way. That kind of backstage! No way,Authenitc MLB Jersey For Sale, it s two timing! By the way,replica oakleys, Mari and Mushroom Head. The scope of his hunting grounds is also quite wide!!! Then,christian louboutin online, Riko passes by and starts to enter the toilet. Riko is surprised when Shibaken suddenly grabs her arm. Shibaken looks a bit flustered and surprised. Meanwhile,NFL Jersey Wholesale Online Store, during school break,cheap christian louboutin online, grumpy Reiko types in her Twitter,Authenitc Sean Weatherspoon Jersey, Mushroom Head and Shibaken Then,Adidas Kanye West Replica, she smiles. He somewhat looks like a younger version

in the most deprived areas are more likely to have a good bus service (defined as a bus stop within a 750 yeezy for sale six minute walk and five or more buses per hour) than respondents in the least deprived areas (35% and 21%, respectively, according to Transport and Travel in Scotland 2011, Section 4). Given the difference in bus service it is understandable that discount ray bans those who live in deprived areas yeezy 750 new release might be more likely to take the bus to work. There is no clear Christian Louboutin Replica relationship between SIMD quintile and the level of rail commuting. Walking 750 yeezy paypal online to work is more common in the most deprived quintile than in the two least cheap mlb jerseys deprived quintiles (17.0% compared with 10.0% and 11.8% respectively). However, the nba jerseys highest cheap ray bans levels of cycling to work cheap michael kors handbags (3.1%) occur in the least deprived quintile. Taken together, the two forms of active travel to work are most common in the most deprived quintile. However, this is significantly different from only one other quintile, the cheap michael kors handbags second least deprived. Perceptions of neighbourhoods fake ray bans and local public services According
says the rally was so inspiring that somebody wholesale jerseys from china stood at the front of the room and said something extremely funny cheap michael kors outlet about NASCAR points 2016 jerseys cheap leader Brad Keselowski. Hendrick sits at a long table in front fake cheap oakleys of yeezy 750 free shipping expansive windows high above the Hendrick Motorsports complex. When I invoke Keselowski, Hendrick begins to cheap jerseys from china smile. Then he laughs. Then he pauses five seconds. “You’d have to use anonymous on that,” he says. Then he yeezy boost 550 black laughs again. “You don’t discount oakleys want to quote me on that,” he says. The cheap authentic jerseys Chase begins Sunday at Chicagoland Speedway, and Hendrick, who might be michael kors outlet the most successful owner in team sports, will be there. “I’m pulling for Jeff to get No. 5, Jimmie authentic jerseys cheap to tie (Dale) Earnhardt replica oakleys (and Richard Petty by winning his seventh championship), Kasey to get his first and Earnhardt to get his first,” Hendrick says. Is 750 yeezy paypal online it like having four kids in the same competition? “It’s exactly like that,” says Hendrick. “There cheap michael kors handbags are reasons I’d like to see Jimmie tie Dale. And I’d love to see Jeff get No